Kyle Barrett, “Illuminated: Antisyzygy” (8:40) — Blending film and painting, the video postulates several questions arising from the COVID-19 pandemic via the notion of “antisyzygy” or the in-between state in which, globally, society has found itself. Ilona Krawczyk, “More than one voice” (10:00) — Why do I feel connected to something which is beyond me, which comes from the past, which I don’t understand? But there are those moments of unconsciousness that come out. Charlotta Grimfjord Cederblad, “Preparation” (10:17) — This video is an observation of what we prepare for when we prepare for performance, of how we prepare for the fact that we soon will be watched, of how we imagine that we are being watched and of what happens with the body when we think that no one is watching.

“More than one voice” 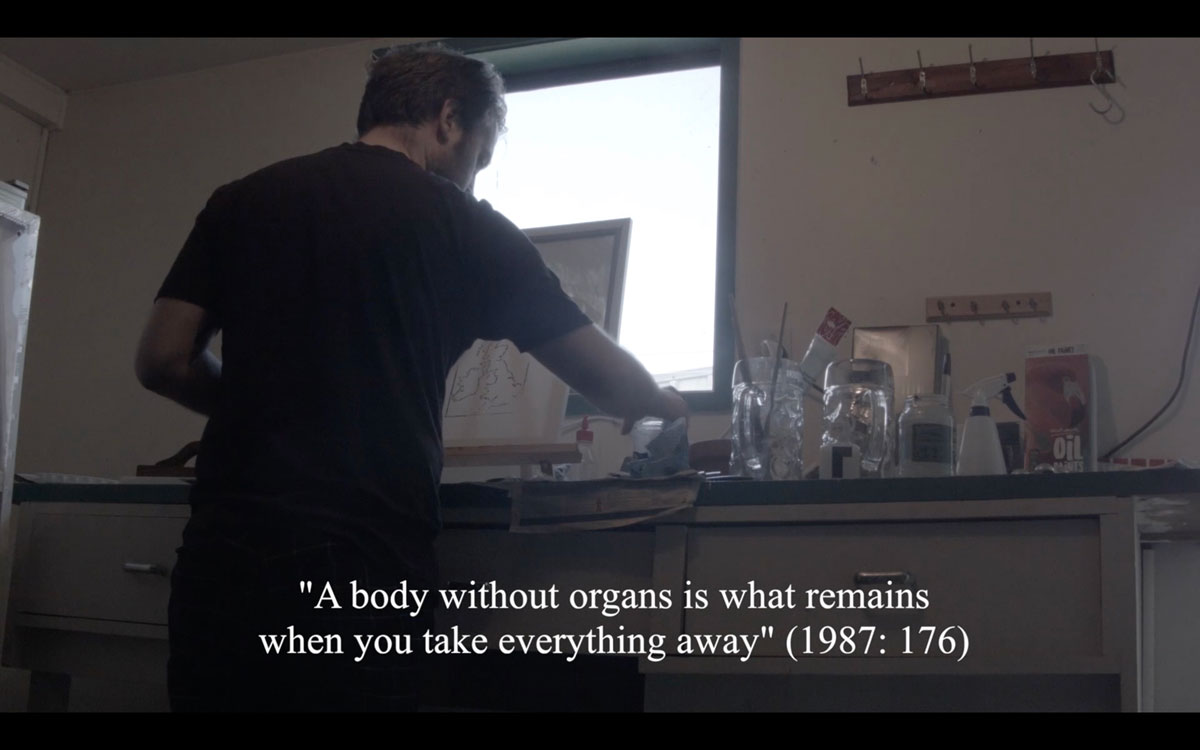 In the realms of Screen Production Research (SPR), an emerging field within the academy, filmmaking can be seen as “a parasitic creative practice, a hybrid medium that takes from and incorporates many other forms of expression” (Berkeley 2018: 31). It is within this “parasitic” notion that I wish to contextualise the video article.

Blending film and painting, the video postulates several questions arising from the COVID-19 pandemic. This project explores the notion of “antisyzygy” or the in-between state that, globally, society has found itself. The intent here is to embody questions from a Scottish ex-pat (myself) living and working in Aotearoa (New Zealand).

The painting represents a response to Scotland’s current situation with another Independence Referendum being touted, which is once again developing out of frustrations from the lack of governing autonomy as, increasingly, the Break-Up of Britain appears to be on the horizon. Here, we locate a sense of an assemblage within Scotland, its identity being undermined and reshaped beyond its control, struggling to maintain its “Europeanness”.

Filmed in a continuous, uncut shot, I draw attention to elements of the body as the painting comes to fruition. This, effectively, demonstrates that the body is a “mode of perception, [that] can contribute to increasingly rich understandings of human perception” (Lala and Kinsella 2011: 79). Throughout the running time are quotations, reflections, and illuminations that stem from this mixed approach of SPR and embodied practice.

This is in an effort to understand if meaning is generated through the practice or disseminated upon completion. The mix of sources range from Deleuze and Guattari, and their discussions of multiplicities, to filmmaker, poet, and author Margaret Tait whose poem “Elasticity” has poignancy given the current social, cultural, and political climate. Can we move on from the pandemic? Or will we return back to an unequal, fractured society?

within both of which the people of Scotland live”

“idea of duelling polarities within one entity”

a different kind of in-between state, several identities and opposites in one entity

The name Kyle has been deterritorialised to Kale

Aotearoa is an assemblage, a toi waihanga,

“a multiplicity which is made up of many heterogeneous terms and

which establishes liaisons, relations between them,

Scotland is an assemblage

What is a British identity?

How was it assembled?

British identity “was forged out of a sense

of isolation and an island fortress imagination” (2007: 9)

Reshaped and reformed our understanding of isolation

With the “European Union being a prime example,

but this is still an unfinished historical task,

one that could fail if the interacting

“national markets cease to give rise

“A body without organs is what remains

Will more be taken away?

This canvas was a Body without Organs…

But what is it now?

“Perhaps in the very combination of opposites […]

we have a reflection of the contrasts which the Scot shows at every turn,

in his political and ecclesiastical history

“in his polemical restlessness, in his adaptability,

which is another way of saying that he has made

allowance for new conditions, in his practical judgement,

which is the admission that two sides

of the matter have been considered” (4).

“And never the clock runs back,

The free days are owre;

“The world shrinks, we luik

“What yon lane boat I see

Do we come together?

Where do we start?

It challenges, argues, rebels against every maister

“The essence of art is

nothing less than the conservation of human experience itself”

This experience must be expressed

We must use the 2020 body without organs

“Think of the word, elastic.

The real elastic quality is the being able to spring back

Or start a new assemblage?

The author declares that they have no competing interests.

MORE THAN ONE VOICE

I try to express it

I try to understand

what my voice expresses.

“The voice manifests the unique being of each human being, and his or her [their] spontaneous self-communication according to the rhythms of a sonorous relation”

In this sense, Cavarero’s vocal ontology of uniqueness opposes the Cartesian “mute voice of consciousness” (Ibid. 173), categories of universalism, and philosophy of voice that considers one kind of normalised and defined culturally vocal expression as “right”, “authentic”, “natural”, …

I can say something without words.

My voice will sing

My voice will say

specific to the country of my origin,

in this spontaneous self-communication,

I use Tahreer – a traditional Iranian singing technique and

I have no evidence that they are a part of my cultural heritage.

Where does the voice come from?

Is it me singing?

Where does the voice

Is it me singing?

Why do I feel connected to something which is beyond me, which comes from the past, which I don’t understand? But there are those moments of unconsciousness that come out.

Why do I feel

which is beyond me

which I don’t understand

“You don’t know if it is you who is bringing about this voice or the voice that is bringing about you, and where the source of the sound is – in your mouth, [in] your chest, in your lungs, in your stomach, in your groin, or maybe in the room’s walls, ceiling, or maybe in distant celestial bodies, in the crystal spheres of the universe” (Flaszen, 2010, 149).

How many voices are we?

How many voices are we?

Which voices we are using?

Which voices we are using?

Do we want our voices?

Do we want our voices?

What is good technique,

what is bad technique?

“Think of these sounds

that are usually considered “wrong”,

… Learn to control them,

to stabilise these so called “mistakes”.

Love them, dig into them,

shape them, transform them

… Trust your sound, let it live the life it wants to live, just accompany it the best you can. Trust your instruments, your strings, your pipes, your vocal chords, they want to go a certain way, follow them, they know”.

The voice – both as bodily event and as the exposition of that event – is the gesture which exhibits the relational uniqueness of being, which each time restages itself towards other (Di Matteo, 2015, 92). 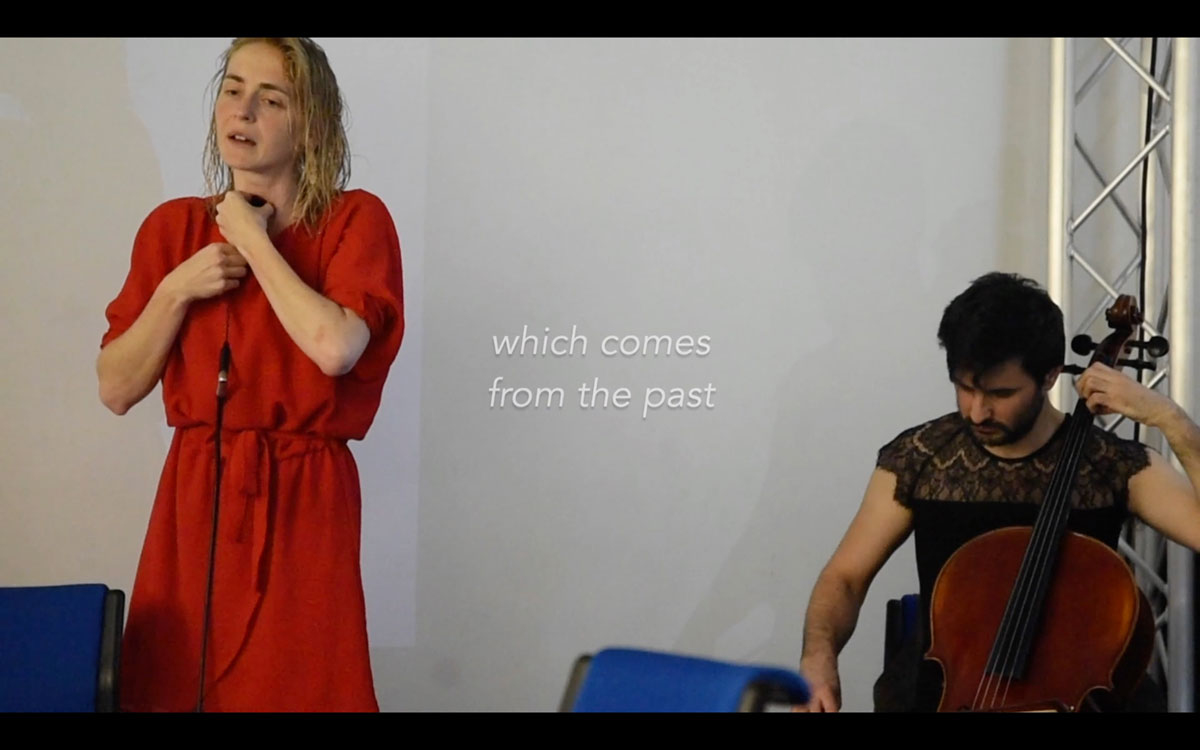 MORE THAN ONE VOICE

by Ilona Krawczyk with Brice Catherin,

Cavarero, A. (2005). For more than one voice: Toward a philosophy of vocal expression. Stanford University Press.

conducted by Ilona Krawczyk at University of Huddersfield thanks to North of England Consortium for Arts and Humanities (NECAH). 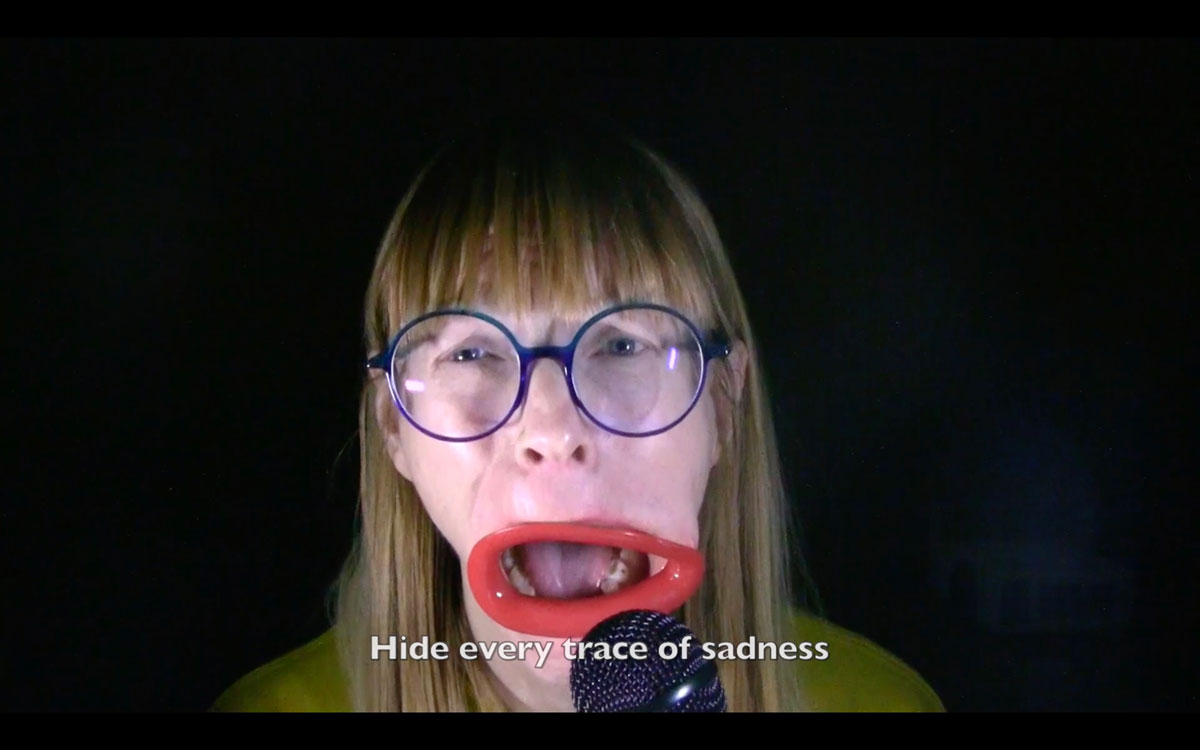 It is in and through the revelation of my

being-as-object for the Other that I

must be able to apprehend the

I have written texts to perform

I have given myself tasks

I have prepared four costume changes

have put the camera on recording

I have chosen music to play

I don’t decide until now

when I will play which music

The name of the performance is

If you look closely you will see me

The audience will enter

and leave the room

as they please during three hours

with my back against the audience

They will only see my face

as a big live projection on the wall

Smile though your heart is aching

Smile even though it’s breaking

When there are clouds in the sky, you’ll get by

If you smile through the fear and sorrow

Light up your face with gladness

Hide every trace of sadness

Although a tear may be ever so near

Smile though your heart is aching

Smile even though it’s breaking

When there are clouds in the sky, you’ll get by

If you smile through the fear and sorrow

Light up your face with gladness

Hide every trace of sadness

Although a tear may be ever so near

…if I tremble at the slightest noise, if

each creak announces to me a look,

this is because I am already in the state

That’s the time you must keep on trying

Smile, what’s the use of crying

If you just smile

That’s the time you must keep on trying

Smile, what’s the use of crying

If you just smile

Perhaps it is impossible to understand

one’s own face. People who live in

society have learned how to see

themselves in mirrors as they appear to

What happens soon is that I stop the

I find the recording in my camera about

It’s not until then I understand that

these ten minutes of preparing have

The whole preparation lasted for

In order to make myself recognized by

the Other, I must risk my own life.

The recording took place at 13festivalen,

With and edited by:

Music heard in the video:

Being and nothingness by Jean-Paul Sartre

The authors have no competing interests to declare.

Cavarero, A. 2005. For more than one voice: Toward a philosophy of vocal expression. Stanford University Press.